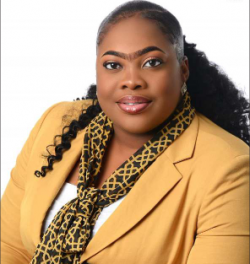 In this day and age where survival appears the greatest challenge, it is not often that one sees another especially women indulge in philanthropic activities genuinely without any ulterior motive. It is politicians who give and violate the biblical injunctions of not letting their right hand know what the left is doing. At a time when many young women are taking into prostitution and all other negative tendencies, it is a rare find to see a young woman of 30 with such a milk of kindness providing opportunities for the not so privileged others to grow and survive.

It is the reason we are celebrating a young Imo woman who just clocked 30 and who is using her Non-governmental Organization (NGO), Jenny Uzo Foundation, to touch lives. Miss Anusiem Jenny is the founder of the NGO which was incorporated in 2018. Anusiem hails from Obowo and attended Federal Government Girls’ College, Umuahia. She later moved to the Imo State University where she earned a degree in History and International Studies in 2012.

Between 2014-2019, she served as the Personal Assistant (Protocol and Welfare) to the Deputy Governor of Imo State, Prince Eze Madumere. She is a seasoned Fashion Designer and owner of Jency Fashions, which specializes in making men’s outfits. The fashion outfit she mentioned aside from creating employment opportunities generates funds for the foundation.

The NGO has kept faith with its vision of supporting the girl child by educating and empowering her academically, socially, fostering gender equality and mentoring the young women.

The activities of the NGO revolves around advocating for the rights of the girl child, educating the girl child on how to take care of herself, providing financial empowerment for the widow and less privileged. The core area of the group is to provide education and enlightenment eliminating the widely held views that ”women education ends in the kitchen”. There is also empowerment through entrepreneurial skills that keep the girl child financially independent.

Some of the achievements of the NGO include among others observing in January 2019 what it called a season of love tagged ‘Owerri Food Stuff Distribution Tour’ during which it shared food stuffs to single mothers who can hardly make ends meet. It held its Hope and Dream project at Obowo LGA Imo State where football competition held among the females in 2018 for the edition. In December 2019 another female tourney held where the ladies were encouraged to pursue their dreams.

The second edition of its Owerri Water and Food feeding project held in 2018 and same year it distributed aprons to market women in the Owerri Relief markets. Same 2018 during its medical and hygiene project in Imo it donated blood and paid the bills of some patients at the Federal Medical Centre, Owerri.
In one of its action plans for 2020 the group promised to set up a female football club and this became a reality in September but was launched in November 2020. She founded the Imo Angels, a club that less than 4 months clinched a trophy in its debut competition. It won an 8 team pre-season women football tourney which took place in Ogun State in March. On her future plans for the club, she said, “we intend to enter for the female league but for now we intend to stabilize the team before we enter into the league.”

Speaking on her 30th birthday and what life has been for her, she stated again, “for me I am proud of myself and all my activities to my generation and my state. I want to thank God for using me as an instrument. All my life I have seen myself giving, helping, reaching out to the less privileged. I am not wealthy but I found myself lucky being used as a tool. It has not been a smooth sail but in all I give glory to God for sustaining me to this stage of my life”.

Advising other young women involved in some negative behaviours, Jenny noted that it is not easy for women but mentioned that they should hold a dream and show determination indicating what they want to be in future. “If they have this kind of mind set the sky would be their starting point. Don’t wait for opportunity to come, move, immediately you move you will see the opportunity.

I pray the young women should embrace a decent lifestyle because life is short on earth”
For now her group has no support or partnership except last month they reached out to 500 students in Umuna Orlu where Aid money, a company of its own, supported in their education of the students on menstrual hygiene during which they distributed scientific pads, shaving sticks among other materials. ‘We are open to sponsors and prays that they come”

On her inspiration to run an NGO of this nature, she declared, “while I worked in the government house I saw different shades of character from politicians but at a time I got close to Nneoma Okorocha who worked closely with the Deputy Gov’s wife especially during the period she organized Women’s August meeting. Then she built houses for widows.

“When I followed the convoy for the opening of the houses I see how the old women use to cry seeing their well furnished houses, on top of all the gifts of wrappers from Nneoma and other people. That alone touched me and made me feel sober. So one December I bought wrappers, between 2014 and 2015, I went to my village to give to widows. I was happy seeing the women happy. They didn’t know me and I don’t know them. At the end of the day, the way they prayed for me got me emotional.

“Once in a while I have always had ideas come into my head to do this do that, do this do that to make people happy. That was how I started. Now I planned to do something for my community as I see people every December move around. I figured out that I could do things that people could participate to entertain. That was how I thought about Female Football because I was told a man donates cup for the men.
“Thus I started women football competition, wrestling competition, cooking competition. At the end of the day the participants go home with prizes. Then some of my relations, uncles, and people from my area had to support me to make a success of the show. That is the beginning of how Jenny Uzo Foundation started. I prayed for the name and success, of which God answered me.”

Jenny revealed that her fashion business is personal to her and finances the Foundation and the football Club. On the participation of women in governance, she notes that the present state government has tried in bringing women into leadership. ‘I don’t know whether or not politicians appreciate that women are important when it comes to governance. When it comes to election times, during campaigns, women have a role they play which you cannot take away from them.

“During election proper, women come out en masse to vote. Women have a way of convincing themselves to vote for a particular person. We are powerful but marginalized. At the end of the day they will refuse to carry women along. Women need to occupy vital positions. I tell you that if the Vice President were to be a woman our country will not be like this. There is no balance where men dominate everything.

There cannot be balance where the President, Vice President, Senate President, Speaker are men. It is not normal. That is why there is instability everywhere. It is the same scenario also in the state. Man, man , man, it is high time you gave women key positions. There are so many intelligent women in the country. There should be gender equality in leadership.”
On her political aspiration if any, she stated none at the moment but did not rule out any probably in future. Finally, she advised women to keep being who they are, to be focused, that their voices would be heard someday. 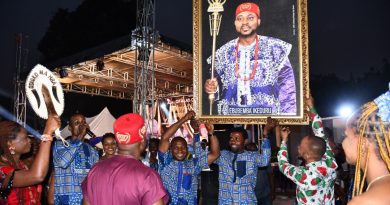 NEWS INSIDER PERSONALITY OF THE YEAR